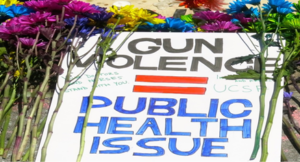 On November 10, 2020, we presented a community webinar “Perspectives on Gun Violence: A Panel of Experts.” Increasingly, gun violence affects women and families. Freedom from fear of violence is one of our AAUW branch priorities. Our panel of experts provided perspectives and resources for action. View highlights from the event on the AAUW Naper YouTube channel.

Panel:
Leslie Ruffing, Volunteer Group Leader for the Naperville area Moms Demand Action for Gun Sense in America, and has served on the group’s leadership team since 2017.  This organization is a grassroots, non-partisan movement composed of Americans fighting for public safety measures that can protect people from gun violence and keep families safe.  The group works with survivors, mayors, law enforcement officers, faith leaders, educators, gun owners, doctors and communities across the country who believe there is more we can do to prevent gun violence. The organization believes that respecting gun rights and protecting people go together.

Robert Marshall, Naperville Chief of Police, is a 28-year veteran of the Naperville Police Department and became Chief of Police in 2012. He has a BS Degree in Law Enforcement from Western IL University, a MS Degree in Public Administration from DePaul University in Chicago, and is a graduate of the Senior Executive Management Program for Police Executives at the John F. Kennedy School of Government in Boston and the FBI National Academy in Quantico, VA.

Tami Tunnell, Downstate Outreach Coordinator for GPEC-ICAV (Gun Violence Prevention Education Center-IL Council Against Handgun Violence.) Tami has worked for 30+ years in the domestic violence field focusing on assisting people with Orders of Protection. She currently serves on the IL Certified Domestic Violence Professional board and has worked for the last 8 years in child welfare.  She works part-time as a facilitator for DCFS’s Countdown to 21 program, and part-time as a community outreach coordinator for GPEC-ICAV. – educating Illinoisans on the Firearms Restraining Order.