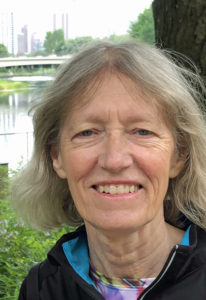 AAUW Naperville Area is pleased to honor Annette Smith as our 2020 Woman of the Year for her exemplary leadership and service to the Naperville community through many years of voter education and advocacy. Since joining the League of Women Voters (LWV) in the 1980s Annette has served as Voter Service Chair, President, and on the board of LWV of Illinois. She has organized numerous candidate forums, developed and published the non-partisan voter guide, Vote411.org, and organized voter registrations that resulted in thousands of new voters. She developed and currently oversees the “Birthday Box” project which delivers boxes filled with non-partisan voting information to local students turning 18. She also is the Naperville Coordinator for DuPage County’s mock election in the High Schools and has been a part of “Stroll to the Polls” which D204 students canvass low-voting precincts increasing voter turnout. Annette credits the help and support of the LWV of Naperville for the success of the above activities.

May 15 – Paid Leave in Illinois